When people talk about a dog crate, I suddenly think about a holiday with my dog.

He needs to be in his crate while being in the car, he is very cooperative that ways. He is an outgoing personality (actually, most dogs are!) who likes to hang out with me at new places.

Well, my dog likes getting in his crate-fort even when we are at home, but you would want to know why most of the dogs don’t like it?

Maybe you can crate train how I trained my little man settling in his crate.

When to Use a Dog Crate – How does it Help You and Your Dog?

You can use a dog crate for two purposes, one for traveling, another for leaving your dog alone at home. In most of the cases, while traveling, a master will stay alongside his pet. In contrast to that, the latter situation leaves the dog on his own to cope with the lonely period.

Honestly, a crate is an effective solution only for short periods. If you need to leave your dog alone in the house, make sure you reach back within a couple of hours. Consider the fact, dogs do not do well without their loved ones.

They think you will not return forever, gradually they will learn you always return no matter what. Yet their separation anxiety never settles when they are hoping your return all the time.

Thus, once you crate train your champ you are free to go out for work leaving the dog alone without even feeling dejected. However, this problem has many possible solutions when you practice the needful activities with utmost care. In most cases, metal crates pretty much help in crate training your little champs.

Why Crate Training a Dog is Necessary

New to using the concept of the dog crate and somewhat feel bad already thinking… Is it cruel to crate train a dog in order to go out for work?

Then it is considerable. I too kept asking experienced users before trying it for the first time. No, it is not a cruel practice to crate your dog, instead, it helps him in many psychological ways.

Obviously, no one should put a dog in a pet carrier while leaving the house for more than four to five hours. Dogs need pee breaks, water breaks, and food if not fed properly. Although dogs do not poop or urinate near their space especially their sleeping and eating area they will have to do it in compelling situations. An adult dog can hold for a long time but a puppy will need frequent breaks.

Dogs are affectionate with their people and seek companionship all the time. This trait makes most the people buy dogs in the first place i.e. ‘affection’. But this trait will make things difficult too.

Someone mature needs to stay around the dog to take care and accompany him. But arranging a pet sitter can be a whole new bothersome chapter considering house safety, dog’s safety, etc. Therefore, choosing a crate to solve the problem is probably the best option.

Dogs are free souls but that does not mean a crate will appear boring to them especially when you stuff it with few toys and reward them with treats. Make it ‘The Happy-Palace’ and see all these advantages come along.

Crate training a dog will have many benefits and inculcate good behavior in him. Learn about these advantages of using a dog crate effectively.

How To Crate Train Your Dog

Crate training a dog is a healthy practice considering you train your little champ that well. You have to work a lot with him while teaching for the first time but keep the practice regular even after that.

Follow these steps to perfectly train your dog to adapt to crates.

#1 Get Him Around the Crate

The point is to make a crate look like a play to him. It will encourage more cooperative behavior from him. Put his favorite toy inside, it will make the whole process a lot easier.

#2 Teach to Get Inside and Come Out on Your Command

Once the dog gets used to the process of playing with the crate, now you teach him to go inside on your command. You can teach him a specific word command for the purpose. For example, say ‘inside’ or ‘kennel’.

Lock him inside after he gets in, remain near-by all the time to make him think – it is all the same when he stays inside. Practice the act silently, do not talk to him or poke your fingers inside the crate. Just do your work being close-by. Ignore his whining for a while and relieve him on your will.

#3 Promote His Participation with Reward

Most of the dogs will agitate going inside the crate while they still can see you. They will want to be in open when you are around. You can reward them with treats to promote them entering the crate.

As stated above, a toy will always help to get him inside. However, don’t use it as a bait just let the permanent place of that toy be inside of a crate.

Practice this step by using the command word repetitively i.e. ‘inside’ or ‘kennel’. Thus, he will relate the whole process of command, crate, getting inside it and receiving the reward.

#4 Start Locking Him Alone in the Room

Till now, he will be habituated with the locked inside the crate. That means, now he sees the crate as his own thing and an enclosure. You can lock him inside rewarding him and loving away where he cannot see you. Work silently and let him understand you are in the house somewhere not specific.

Check in after a few minutes i.e. less than 30 minutes to see how he reacts, if he is calm you can increase his ‘Happy-Palace’ time a bit. But if he is anxious and loud, keep practicing this act for the same duration.

#5 Start Locking Him Alone in the House

Now onwards, you can start locking him in his crate. And instead of leaving him alone in the room you can leave him alone in the house. Try to make the transit out of the house as silent as possible. Moreover, dogs get more desperate when you leave them while going out.

Practice the same drill following the above steps i.e. command, toy, reward, silence. But make sure you have to return back within a few minutes, a dog even at an early age need some time managing his instincts.

Now that you can move inside and outside the house easily after locking him for few minutes or even an hour you can let him sleep in his crate for the whole night. Crate has the best psychological effect on dogs i.e. make them feel safe.

Thus, when you crate train him to sleep the whole night, you are almost done teaching him to be alone. However, you need to manage their waking time which is earlier to yours; maybe set an alarm for a few days until he gets habituated sleeping inside. Afterward, the dog himself will choose to use the crate for sleeping.

After following the easy six-step crate training guide you can easily crate train your dog the same, but understand that consistency, patience, No roughhousing are the keys. However, you need to go through these frequent mistakes people make.

Well, the answer is simple. Crate Training a puppy will require about a month of time. Likewise, an older dog or a sensitive dog will require more time compared to a puppy.

You do not need to jump to another step before completely trusting your dog with the current step which he is on.

You will find a dog urinating in the crate during separation anxiety. Generally, crate training an adult dog will not work with toys and treats alone. You will have to facilitate him with the nicest floor pad inside the crate. Ultimately, he should have the best spot inside his crate.

Being inside a crate is a part of training every dog can learn if trained with utmost patience and consistency. All you need to do is, make the crate time appear like a happy place for the Fido. 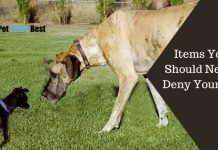