The Miniature Pinscher or the little ‘King of toys’ is rightly called so for his king-like attitude and a small frame. The delicate looking toy breed is fearless, alert, and makes a great companion dog.

First bred to hunt rats, this breed is called Zwergpinscher in Germany, his country of origin. The Miniature Pinschers are fearless and make great watchdogs. This curious little dogs have a lot of energy and are great escape artists.

Moreover, they’re curious, intelligent and very vigorous. The people who share their life with a Min-Pin never tend to get bored.

‘Min Pins’ have an arched neck and a sturdy body. They are well-muscled and were first bred to hunt rats. They’re affectionate and loving but also crave a lot of attention. They love running around and are extremely playful.

Moreover, their smooth, shiny coat comes in two shades of solid red, or chocolate-and-rust or black-and-rust. They have strong nails that grow quickly, so the nails need to be trimmed weekly. The min-pins are valuable as watchdogs despite their tiny size.

Miniature Pinscher is a very old dog breed according to historical artifacts, but factual evidence dates them back only 200 years.

They first originated in Germany. Dogs resembling them were depicted in art as early as the 1600s, but it was not until the 1800s that they were developed into a distinct breed, the ‘reh pinscher’.

Historians believe that the breed’s earliest ancestors may have included the mix between the Italian greyhounds and dachshunds. It is a very common misconception that the Miniature Pinscher is a “miniature Doberman”, this is obviously untrue.

The breed looks like a miniature Doberman pinscher because both were created in crosses with the German Pinscher. The breed’s elegance and showmanship reached great heights as a show dog in pre World war I Germany and, although its numbers there were decimated by the war, it has flourished as a show dog and companion throughout the world since.

3. The Personality of Miniature Pinscher

Miniature Pinschers are assertive, independent and playful. They seek a lot of attention. They are very energetic and thus are said to be very good at escaping. Min-pins are great with families. However, they may not be very nice with toddlers. True to their nickname, the king of toys will rule your house too.

They have a great desire to chase smaller creatures, thus they are advised to be leashed or fenced when outdoors. They are territorial dogs and are often the aggressors in dogfights making them not very friendly with other dogs and cats.

Though they are great with families, they may not like children very much. They are energetic, brave, fearless and love to play.

The Miniature Pinscher is very active and athletic and needs quite an amount of exercise for its size.

A long walk every day will do the needed. 40 minutes daily would do the needful as the breed is very active and energetic.

Exercise is very essential to avoid any behavior issues with Min Pins. Both mental and physical exercise are important, thus indulging the dog in some puzzle games may be helpful too.

They are prone to getting overweight. A great way to be sure your Miniature Pinscher’s dieting needs are correct is to check his figure.

You should be able to feel his ribs rather easily but not see them. If you can see his ribs, he needs to be eating more, and if you can’t feel them through his skin, it may be time to increase his exercise and cut down on the treats. Clean, fresh water should be available at all times. 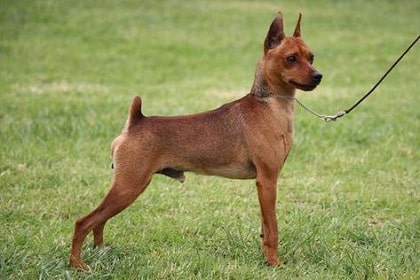 Early training classes are recommended for a well behaved Min-Pin. They are very smart but also very independent. Well known for their intelligence, the Min-Pins pick up training easily but can be stubborn at times.

They are strong-willed and mischievous. They need firm training to control their inappropriate barking. At 8 to 10 weeks the puppy is capable of training so make sure you start his training at an early age.

Supervision with children is required with this dog breed. It is thus very important to train your dogs to be good around children and other dogs.

However, their teeth should be brushed often and regular vet visits are recommended. Their ears are prone to wax buildup and accumulation of debris, so they should be checked and cleaned on a weekly basis.

9. Who should Adopt a Miniature Pinscher?

The Miniature Pinscher is perfect for families with older children. However, a family having small children should avoid adopting a Min-pin. They demand a lot of attention and are very territorial.

If you like activity and entertainment, they are great for you as the Min-Pins are always on the move. But if you are someone who has a busy schedule or like living in peace and quiet this might not be the right dog breed for you.

Thus, if you are someone who can give a dog your time and attention, then the Miniature Pinscher is just perfect for you.