A few years back the name “Akita” might have not been much familiar to you but over the recent few years, this breed has come to prominence. All thanks to the movie ‘Hachiko”.

As shown in the film, Akitas are a Japanese dog breed which is very powerful, independent and extremely faithful to family members.

Akitas have a sturdy build with a large head, erect ears which are triangular in shape and a curly tail. These dogs have a double coat with fur which is ideally hued in white, black, red, fawn and also sesame at times.

These big sized dogs usually weigh between 45-59kg for males and 32-45kg for females. We often tend to confuse them with breeds like Siberian Husky based on their appearance.

As per the legend goes, Akitas are the descendants of Matagi, a hunting dog who was one of the oldest dogs of the land.

This breed primarily achieved fame and recognition from the movie Hachiko and the works of Helen Keller.

After World War 2, the Akitas were almost on the verge of extinction. It was the active participation of the government and the love of the owners that brought back the count of their population back to normal. Although famous all throughout the world, the American Akitas were rejected by the Japanese as their appearance was considered unfit for the dog shows.

Akitas have a very strong personality. On being bred to be alone from puppyhood, these dogs hate to share their master’s attention with other pets. These cuties are very loyal to their owners and are warm and playful with children. Akitas take quite a bit of time to welcome new members to the family. They possess intelligence as a virtue and love to prove it by facing new hurdles. 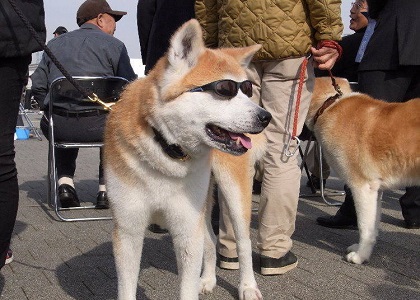 Our cute Akitas are not one of the dirty dogs who love playing around with mud. They love to have their coats brushed and the rest well groomed. Akitas are not only known for its loyalty but also for its protectiveness. Territorial in nature, they are absolutely unwilling to accept anyone trespassing their property.

They might look like gigantic beasts always on the prowl but are absolute softies at heart. Their assurance of dependability makes them excellent choices for the role of a therapy dog. They are known for their responsive “ talk” instead of “bark”.

Having a dominant personality, the Akitas are less likely to be submissive to you. It requires a lot of determination and a bit of patience train an Akita. Since they have are not very amiable with strangers Akitas should be trained to socialize from the time of their babyhood in order to prevent embarrassing situations in the future. They should always be kept on a leash and within strong fenced boundaries.

Having great physical strength and agility Akitas love to be engaged in outdoor activities like hunting, hiking, playing a variety of games.

Fish meat and rice are the best friends of an Akita. However, the quantity of food to be served completely depends on the age of the dog. Serving one or two heavy meals for the entire day might lead to indigestion or bloating.

Thus it is advisable to feed small bowls of food throughout the day. Meat and fish add on the protein element to the diet. Rice forms the major part of carbohydrates in the diet and vegetables provide the necessary vitamins and minerals thus forming a balanced diet. Avoid feeding mushrooms, chocolates, cooked bones etc to your dog.

All living creatures are bound to fall weak and surrender in front of maladies at some point of time in their life. It is an inevitable part of our life.

The common diseases taking a toll on the health of Akitas are hip dysplasia, thyroid, bloating, retinal atrophy etc.

9. Who should Adopt an Akita Puppy?

Before getting a dog, one must be sure of what kind of dog one wants in their family. If the shy, submissive and small poodle is what you want then an Akita is definitely not the one for you.

Instead, if you are looking for some energetic, powerful, and intelligent breed then Akita is a dog you should go for. Always observe the traits of a dog and try to understand if it’s the correct choice that you are making for the happiness of both you and your dog.